Weight loss surgery is not “one size fits all.” There is no specific procedure that is best for every patient. Factors that impact the choice of the procedure include the patient’s age, the current state of health, current weight, and desired outcome.

The weight loss surgery options we offer are: 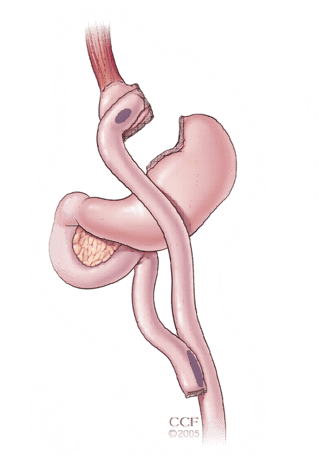 The gastric bypass works by several mechanisms. First, similar to most bariatric procedures, the newly created stomach pouch is considerably smaller and facilitates significantly smaller meals, which translates into less calories consumed. Additionally, because there is less digestion of food by the smaller stomach pouch, and there is a segment of small intestine that would normally absorb calories as well as nutrients that no longer has food going through it, there is probably to some degree less absorption of calories and nutrients.

Most importantly, the rerouting of the food stream produces changes in gut hormones that promote satiety, suppress hunger, and reverse one of the primary mechanisms by which obesity induces type 2 diabetes.

The Laparoscopic Sleeve Gastrectomy – often called the sleeve – is performed by removing approximately 80 percent of the stomach. The remaining stomach is a tubular pouch that resembles a banana.

This procedure works by several mechanisms. First, the new stomach pouch holds a considerably smaller volume than the normal stomach and helps to significantly reduce the amount of food (and thus calories) that can be consumed. The greater impact, however, seems to be the effect the surgery has on gut hormones that impact a number of factors including hunger, satiety, and blood sugar control.

The Adjustable Gastric Band – often called the band – involves an inflatable band that is placed around the upper portion of the stomach, creating a small stomach pouch above the band, and the rest of the stomach below the band.

The common explanation of how this device works is that with the smaller stomach pouch, eating just a small amount of food will satisfy hunger and promote the feeling of fullness. The feeling of fullness depends upon the size of the opening between the pouch and the remainder of the stomach created by the gastric band. The size of the stomach opening can be adjusted by filling the band with sterile saline, which is injected through a port placed under the skin. 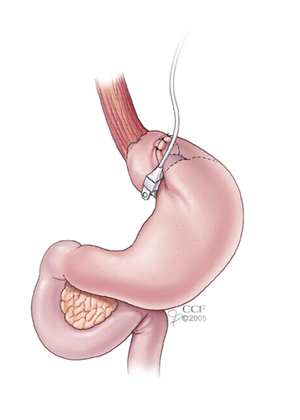 Reducing the size of the opening is done gradually over time with repeated adjustments or “fills.” The notion that the band is a restrictive procedure (works by restricting how much food can be consumed per meal and by restricting the emptying of the food through the band) has been challenged by studies that show the food passes rather quickly through the band, and that absence of hunger or feeling of being satisfied was not related to food remaining in the pouch above the band. What is known is that there is no malabsorption; the food is digested and absorbed as it would be normally.

The clinical impact of the band seems to be that it reduces hunger, which helps the patients to decrease the amount of calories that are consumed.

We are learning more and more that surgery is just a tool. If not used and maintained properly, like any tool, it may not work. We know patients do better with maintaining weight loss if they follow up and attend regular support groups. Follow-up is recommended yearly for post-surgical patients, and sometimes more often if you have a band or have problems. If you have had surgery elsewhere and need follow-up care, you may be a candidate to join our program. Attend a seminar or support group to learn more.

If your sleeve, bypass or band has quit working for you, rarely there is an anatomic reason. We can evaluate this and possibly recommend revisions to your surgery.